Once a bird collides with your San Jose home’s window–you start to realize that bird strikes are not only a problem for highrises. That’s right, homes experience them too. They are a growing problem that hurts birds and damages windows too. If you do a quick Google search will yield you some DIY ways to stop this tragic occurrence. From installing screens to painting the glass of windows there are many diverse suggestions. However, none that works as well for stopping them all together than having bird deterrent window film installed. Happily, bird strike window film comes with added benefits also.

The most important benefit of bird strike window film is that it stops birds from crashing into your windows. These films are called “fretted” films and have dots embedded in them that are nearly invisible to humans. The pattern is, however, highly visible to birds and disrupts the reflection of the open sky. When a bird sees the pattern it knows a window is not sky and flies around it; saving the bird’s life and protecting the glass of your home windows from damage.

Although they are designed to keep birds from crashing into windows, bird deterrent films utilize many of the same technologies of other window films. This means they have similar benefits too. This includes things like:

When you purchase bird deterrent window film you are not just purchasing protection for our fine feathered friends but also greatly improving the performance of your San Jose area home windows too! You will save money, time, and avian lives–making it an excellent home investment.

For more information on benefits from fretted bird deterrent window films–contact us today! 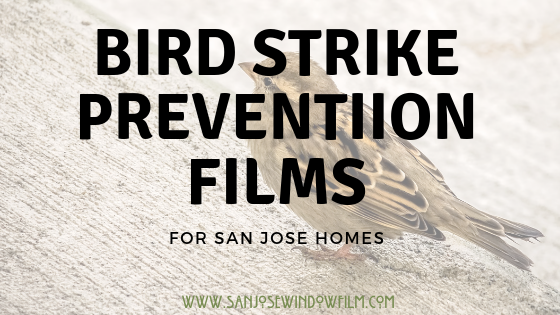